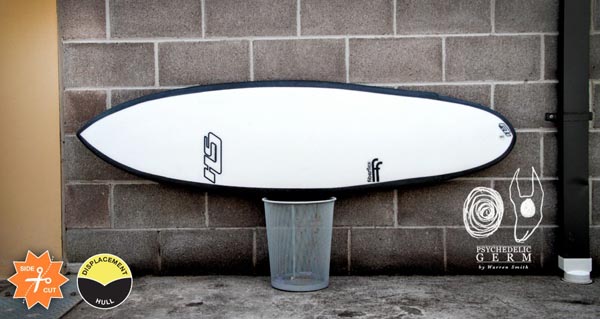 The Psychedelic Germ by Hayden Shapes. It’s the weirdest looking board out there and it’s name is pretty strange too… but when it works, it works and nothing can change that. I’ve talked about it on the blog before but after riding one and believing in the board myself I felt we should revisit it again.

Hayden Cox of Hayden Shapes says “The Pychedelic Germ is a Warren Smith signature model. Its a highly responsive, shorter, wider board with added features that make it ideal for innovative surfing. I used the shred sled as a starting point to design this board, the main changes are the displacement hull, and side cuts.

The hull softens the water flow through the entry of the board, it hits the ridge of the hull, and is dispersed into the single concave. This helps when taking off late, planing through choppy water or landing critical manouvers. The side cuts shorten the radius of your turn, meaning the board will draw a much tighter arc. When you bottom turn, you engage the 3 dimensional curve the side cut creates, which draws you up the wave face. You then transition onto your inside rail which pulls you around back into the pocket with ease. The rocker is flat in the belly, giving the board flowing speed, yet it kicks late in the nose and a little in the tail. The deep single concave in the center of the board blends into a double vee out the tail.

If you want a shorter wider board that’s strikes the balance between performance and innovation the germ has all the features that you need to bring a whole new dimension to your surfing.” 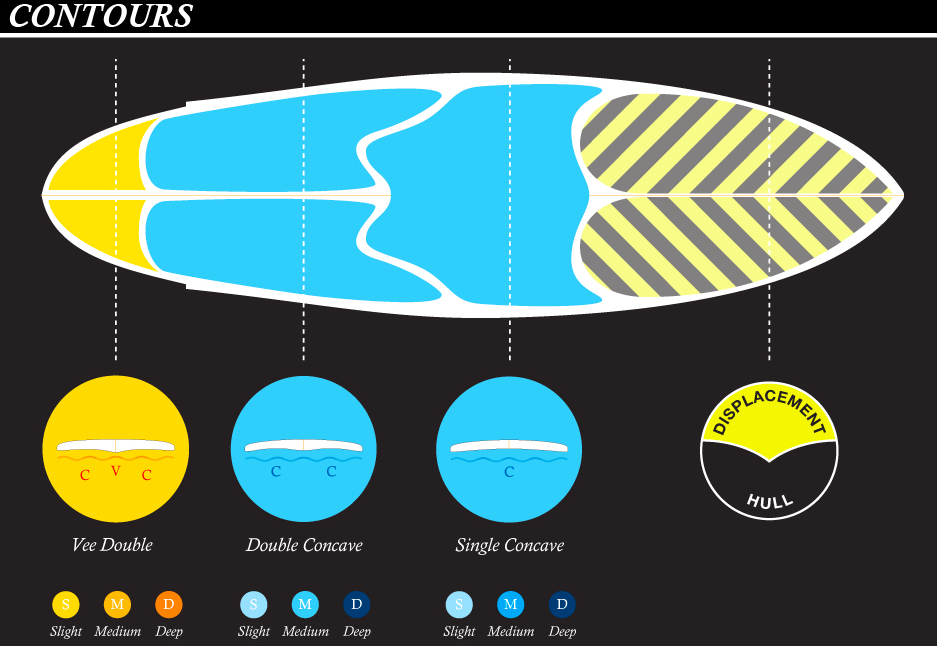 Steve has been on the Psychedelic since it released.  He’s been swearing by it from day one, but…..  he’s Steve and he’s on a different level so you gotta take his opinion with a grain of salt.  But I managed to find a few mortals, beside myself, to give their take on the board that way it would make a little more sense for average surfers like myself.

Chris Carr– “I have no clue what my ideal board is, or really know much about surfboard technology for that matter. What I do know is that there is something magical in the Germ. It’s one of those boards you see someone riding on and they look like they’re having a good time. Who doesn’t like having a good time? Out of my personal quiver the Germ probably has logged the most centimeters surfed, and it makes me feel good.”

Phil Munson– “I more than lucked out winning Fantasy Surfer last season by scoring the Psychedelic Germ by Hayden Shapes.  Thanks to Pioneers I’ve been riding the 6’0″ and have had nothing but extreme fun on it.  Over the past few months I have been able to surf it in everything from knee highs to head highs in various conditions allowing me to grow accustomed to how well the germ can perform in almost anything.  Not only does the board surf well, I swear it has allowed me to improve on so many levels of my surfing like making tighter turns than I was ever able to do and making it through sections I was never able to tackle on my other short boards.  It’s responsive, buoyant, fast, and catches waves with ease; I know I made the right choice by selecting the germ as my board.”

Chis Cote from Surfing Magazine – “When I first saw this board, I thought, “What the f—k is this thing all about?” It looked like squid’s head sans tentacles. I put it under my arm and it felt odd.  The rails felt too pinchy and the displacement hull tripped me out—a displacement hull on a shortboard? The “wing” and the rails leading up to the wing seemed like they were made more for artistic purposes rather than shredding. My initial thought was that this board would be nice to try out for a few minutes just to say I did, then immediately grab my normal board and put this weird thing back on the rack. Then I rode it, and holy shit—it went insane!

I can’t explain why all the oddities attached this board work together, but somehow they do. On the first wave I caught, the board shot out off the take off and contrary to what I thought it would ride like, it was an effortless transition from my standard shortboard to the Psychedelic Germ. Long bottom turns bypassing crumbly sections were made simple and tight arcs in the pocket felt pretty easy. As hard as I pushed on turns, the rails and fins held and I never slipped out (although I’m nowhere near a power surfer). I did have a few issue coming straight off the top trying to kick the tail out on the open face, but the downsides of the board are few and far between.

Warren Smith is an odd but wonderful human; his board is both odd and wonderful as well. Most of the time when a board is sent to be tested we ship it back when requested, but a quick memo to the guys at Hayden Shapes: don’t even try to ask for this board back—you’ll have to pry it from my cold dead fingers! In short, I love this board, and I’m a picky sonofabitch.“

My two cents is that it is the most responsive board I’ve ever surfed and when my turns link up just right I’d swear I was riding a snow board!  We’ve got some in stock now and more on the way.  If a new board is in your future and you’re looking for something a little different that will surf just about anything I would take a minute and consider the Psychedelic Germ from Hayden Shapes.

And just to back this board up with a little more street credit… Dane Renyolds rides this board a ton and Sally Fitzgibbons has ridden it to victory on the Women’s World Tour!