A GUIDE TO SURFING ETIQUETTE 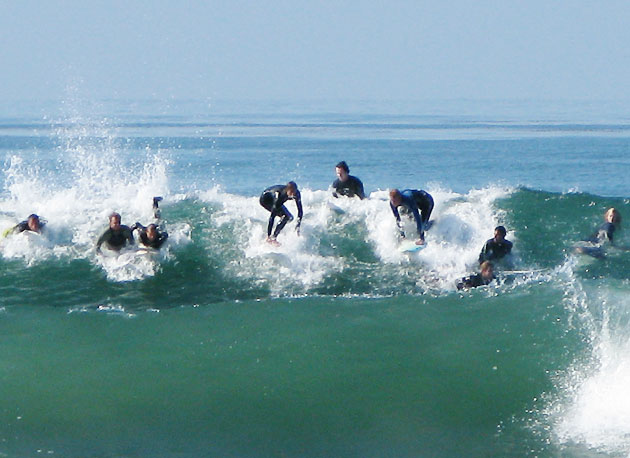 With surfing’s ever growing popularity the beaches and breaks are more crowded than ever before.  Due to the increased number of surfers in the water it’s EXTREMELY important to know the basic rules of surfing etiquette to keep both yourself and other surfers safe and happy.

The one thing to remember here is that at one point or another every surfer was a BEGINNER and one of the most important things to learn as a beginner is proper etiquette while in the water.  There are certain unspoken rules which all surfers follow but unless you searched them out online or asked someone chances are you learned them the hard way.  Surfers in general are as mellow as they come but if you start stealing waves and dropping in on people the gloves are going to come off.  Do your part as a surfer and read up so you have a good session and so you don’t ruin anyone else’s! Now go take a lesson or rent a board for the day and give it a go!

HERE’S THE LIST!!! MORE DETAIL INFO BELOW ON EACH RULE AS WELL AS SOME TERMS AND DEFINITIONS

RULE #1 The surfer closest to the peak of the wave has the right of way
RULE #2 Don’t drop in on another surfer
RULE #3 Paddle out wide of surfers not straight at them and yield to any surfer up and riding
RULE #4 DO NOT ditch your board, EVER
RULE #5 Don’t steal waves
RULE #6 Don’t be a wave hog
RULE #7 If you mess up apologize

The surfer closest to the peak of the wave has the right of way. This means if you’re paddling for a right, and a surfer on your left is also paddling for it, you must yield to him or her. There are a couple variations to this rule:

If someone is up riding a wave, don’t attempt a late takeoff between the curl/whitewater and the surfer. If the surfer who’s riding the wave wants to make a cutback she’ll run right into you.

Just because the whitewater catches up to a surfer riding a wave doesn’t give you permission to take off down the line. Many talented surfers can outrun the section and get back to the face of the wave.

A-Frames or Split Peaks: If two surfers are on either side of the peak, they each have the right of way to take off on their respective sides. It’s not generally accepted to take off behind the peak unless there’s nobody on the other side. These surfers should split the peak and go opposite ways.

If a surfer riding a wave gets closed out with an impossible section or wipes out, the next surfer down the line can take off. If you’re a very new beginner I’d hold off on doing this anyway until you have a bit more experience.

If a wave is breaking towards itself (a closeout) and two surfers are taking off at each other, yes both have the right of way but this is a perilous situation and it’s advisable to kick out early to avoid a collision.

RULE #2 DON’T DROP IN ON ANOTHER SURFER

This is related to Rule #1. This is probably the most important part of surfing etiquette. Dropping in means that someone with the right of way is either about to take off on a wave or is already riding a wave, and you also take off on the same wave in front of him or her. This blocks his ride down the line, and is extremely annoying, not to mention dangerous. If you are tempted to drop in remember this: no matter how good the wave is, if you drop in on someone you’ll feel like crap, the other surfer will be pissed, and the wave will be ruined for everyone.

Some common sense surfing etiquette rules that people don’t seem to realize are important. Don’t paddle straight through the heart of the lineup where people are surfing. Paddle out through the channel where the waves aren’t breaking and people aren’t surfing. Sometimes at spread out beach breaks this is hard, but usually there is a less crowded area to paddle through.

When paddling back out, do NOT paddle in front of someone riding a wave unless you’re well, well in front of him. You must paddle behind those who are up and riding and take the whitewater hit or duckdive. You’ll appreciate this the next time you’re up on a wave.

Sometimes you’ll just end up in a bad spot and won’t be able to paddle behind a surfer. It’s your responsibility to speed paddle to get over the wave and out of his or her way. If you don’t do this, he or she might just run you over!

This is important, especially when it gets crowded!!!! Always try to maintain control and contact with your board. Surfboards are large, heavy, and hard. If you let your board go flying around, it is going to eventually clock someone in the head. This means if you’re paddling out and a wall of whitewater is coming, you don’t have permission to just throw your board away and dive under. If you throw your board and there is someone paddling out behind you, there is going to be carnage. This is a hard rule for beginners, but if you manage to avoid picking up the habit of throwing your board you will be a MUCH better surfer.

“Snaking” is when a surfer paddles around another surfer in order position himself to get the right of way for a wave. He is effectively making a big “S” around a fellow surfer. While not immediately hazardous to your health, this is incredibly annoying. You can’t cut the lineup. Patiently wait your turn. Wave hogs don’t get respect in the water. Also, being a local doesn’t give you permission to ruthlessly snake visitors who are being polite. If they’re not being polite, well…

Just because you can catch all the waves doesn’t mean you should. This generally applies to longboarders and stand up paddlers. Since it’s easier to catch waves on these watercraft, it becomes tempting to catch them all, leaving nothing for shortboarders on the inside. Give a wave, get a wave.

RULE #7 IF YOU MESS UP… APOLOGIZE

Nobody really mentions this in surfing etiquette lists, but if you mess up and accidentally drop in or mess up someone’s wave, a quick apology is appreciated, and goes a long way to reducing tension in crowded lineups. You don’t have to grovel at their feet (well, unless you did something horrible). Honestly, if you drop in on someone and then ignore them, it’s pretty stupid.

Info from The Surfing Handbook